I'm decluttering in preparation for an eventual move. As I go through every nook and cranny of the house, I'm thinking of two things: How much would it cost me to move this, and if my new living space is a lot smaller, would this crowd out my writerly possessions?

As a writer who is inspired by the supernatural and unknown, it was really difficult for me to go through my Halloween decorations. I love those stupid styrofoam gravestones, but I had to ask: Do I know if I'll even have outdoor space for them in the new place? Even if there is space, how much will this add to the total cost of moving as opposed to buying them again for the new place?

It's December and I'm going through the same process. I really should have started a month ago, but there's still time to donate or give away decorations to people who could use them. Here are some aspects I considered. 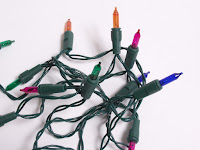 I had a few sets that didn't light and I couldn't figure out if the problem was a bulb or lighting. Theoretically, today's strings of lights will still work if one bulb is out. So, that should mean that there's a problem with the string and it shouldn't be used, right? Okay, but how about all those bulbs that still work perfectly fine?

Okay, assume that I took the time to go through each bulb and test it in a working string. That would take precious time from my writing. Do I really want to do that?

And even if I did, maybe combining it with another task (listening to an audio book), when would I use those hundreds of little bulbs?

And if I don't have time to go through each bulb this year, that means it gets packed and gets moved. A string of lights isn't that big, but it could take the place in the moving van of some writerly items like a book or a notebook or a package of good pens.

And the final test: How much would it cost to move them as opposed to buying new strands next year?

Yet just as I'm about to drop it in the wastebasket, my conscience kicks in and reminds me that this, this trashing of potentially repairable things, is against my commitment to the new Three R's: Reduce, Reuse, and Recycle. It's participating in our throwaway society.

So I try again. I can't get them to work. Sadly, I throw them away, and wish I knew one of those old-time tinkers who love a challenge like this.

I don't decorate as much these days. The day job usually gets very busy after summer is over, October is usually a very busy month for Halloween-related events, and November, even if I'm not actively participating in NaNoWriMo, is the month that I really feel the need to write again.


So when December 1 rolls around, and I think of devoting writing time to hanging all those decorations and then devoting time in January to take them all down and pack them away again, I realize that I just don't have time anymore.

As I did with the lights, I consider what decorating space I might have after I eventually move. I consider the cost of moving the decorations as opposed to buying new ones. I consider my ethical problems with a throwaway society. Here, though, I have an ethical choice. If they're in good condition, I can still give them away or donate them somewhere.

But unlike lights, decorations could have emotional ties. Take, for example, that Christmas stocking that a favorite aunt made. That, I'll keep. Those ornaments I've had for years? If that's the only emotional connection, that they were part of years gone by, take a picture of the ones I would like to remember, and then give the originals away. 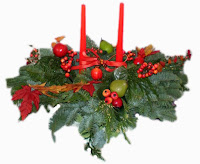 What about that Yule log candle holder?  I can burn it in the fireplace at the end of Yule (or the end of December), or I can leave it in the nearby woods to gently return to nature. It would be easy enough to make a new one next year even if I've moved by then and don't have a basement or garage where I can craft things that require the use of a drill. I might even try this version on the HGTV web site that uses tea lights instead of tall candles (scroll down to the bottom).


I've probably waited too late to post this article. You're probably already tied up in the craziness of the season. Don't worry. I'll remind you next year. Decluttering, after all, is evergreen.

Comments are moderated to prevent spam appearing on this page. This means you won't see your post right away. Sorry for the inconvenience.